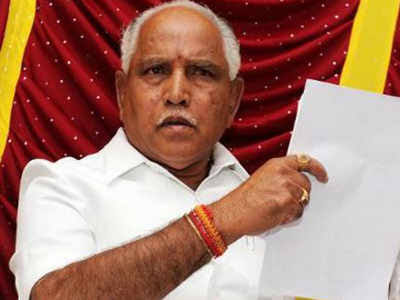 Yediyurappa made the statement during the 64th celebration of Kannada Rajyotsava, marking the state’s formation day.

Yediyurappa made the statement during the 64th celebration of Kannada Rajyotsava, marking the state’s formation day, in Bengaluru’s Kanteerava Stadium.

Yediyurappa urged people from other states and countries living in Karnataka to adopt the language, culture and lifestyle of the land, and also respect the Kannada language and learn it.

Yediyurappa hoisted both the Indian tricolour and the yellow-red Kannada flag. He said that both flags are equally respected and that there was no issue in hoisting them.

He further advocated the use of Kannada in business and commercial activities including that of private companies.

Karnataka Rajyotsava celebrations were organised in many areas in the state including in Udupi, Tumakuru, Mysuru, Belagavi, Raichur, Kalaburagi and Bidar.

Yediyurappa’s statements also come at a time when the Karnataka government is planning to intensify its crackdown on illegal immigrants in the state. The Home Ministry is discussing the implementation of the National Register of Citizens (NRC), which was first implemented in Assam. Residents of Assam were asked to prove their citizenship by providing documents that showed they were in India before March, 1971.